Before stepping onto the field, get your head around the game. 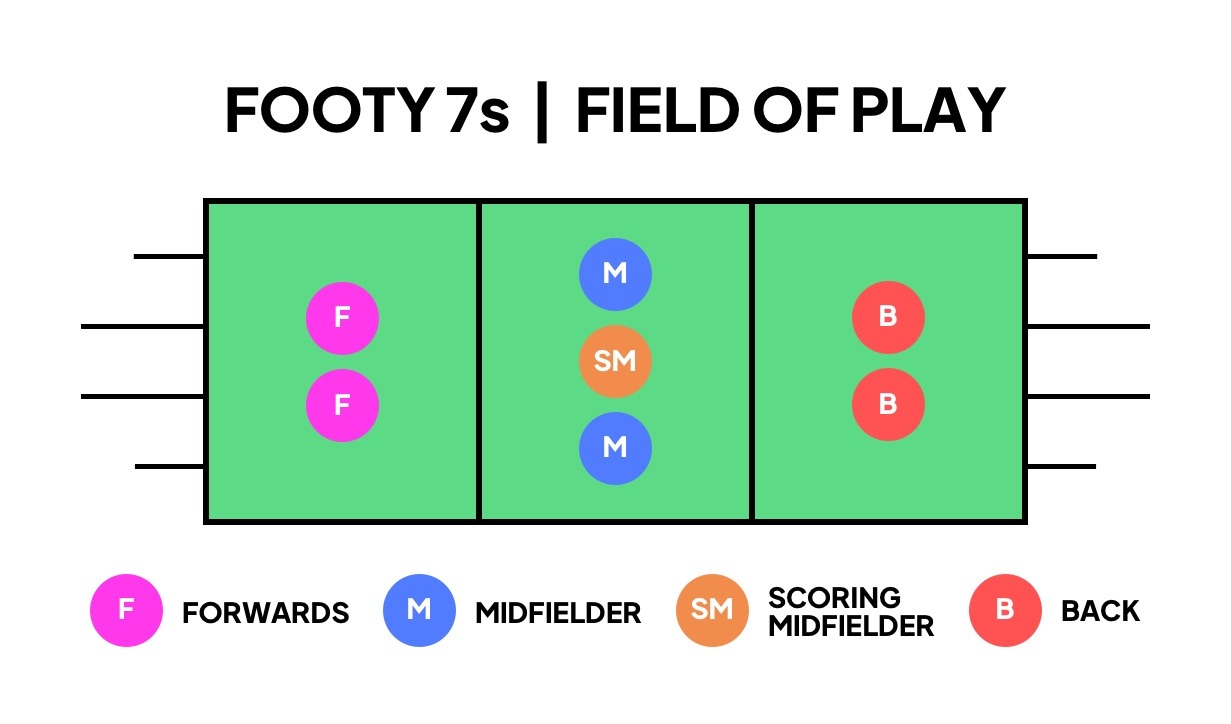 1.2 The player positions are as follows:

2.2 There will be a one minute break at half-time.

2.3 A match is started and finished by the umpire’s whistle

3.1 A maximum of 7 players are permitted on the field at any one time.

3.4 A team must have a minimum number of 4 players to start the game.

3.5 Players are permitted to play across multiple teams per night in the following situations:

A team can borrow players from another team as long as they start the game with a minimum of their own 4 registered players.

Individual players can play for another team as long as they are in the same or lower division. Eg. Division 1 players cannot play in a division 2 league.

Individual players can play in both a men's team and a mixed team on the same night. This is permitted due to both competitions being appropriately separate.

3.7 For all Footy 7s senior competitions, players must be a minimum of 15 years of age to participate. It is the responsibility of each team to ensure this rule is enforced at all times.

4.1 The game is commenced with a ball up in the midfield zone between two centre players standing toe to toe. This occurs at the start of each half and after a goal has been scored.

4.2 The centre players contesting the ball up must tap or palm the ball backwards, when the ball is on the way down. Punching and taking possession of the ball are not permitted.

4.3 The remaining centre players stand a minimum of 2 metres away from the ruck contest on the defensive side of the ball up.

4.4 The player who wins possession from the ruck contest has a maximum of 2 seconds to dispose of the ball.

4.5 Players must start in their designated zone after a goal has been scored.

5. Possession Of The Ball

5.1 The ball must be disposed of correctly by handball or kick in each zone for a goal scoring opportunity to occur.

5.2 The kick in after a behind is only permitted to enter the middle and defensive third.

5.4 A player is only permitted to bounce the ball once while they are in possession of the ball. The ball must be bounced once after 15 metres.

5.5 If the ball is kicked or handballed over two-thirds, a free kick will be awarded to the appropriate team on their defensive third line.

6. Gaining Possession Of The Ball

6.1 A turnover occurs in the following instances:

The only time the ball can touch the ground is from a ball up contest or when a forward is shooting for goal. *

6.2 If a turnover occurs, the opposing team takes possession of the ball where the ball first touched the ground, went out of bounds or where the player was caught in possession.

6.3 The nearest player to where the turnover occurs must take possession of the ball. They can dispose by hand or foot if the turnover occurred on field. For out-of-bounds, the ball must be disposed by kick only.

6.4 The ball must be kicked in from out of bounds. A shot for goal is not permitted.

6.5 A ball up occurs if there is any doubt as to which team caused the turnover.

7. Dispossession Of The Ball

7.1 A player must be caught 'holding the ball' by the 'two handed touch' method. No tackling, bumping or barging is permitted.

7.2 If a player is deemed to have had prior opportunity to dispose of the ball, this is considered 'holding the ball' and a turnover occurs.

8.1 A ‘mark’ is awarded if a player controls the ball after it has been kicked a minimum 5 metres without getting touched by another player or hitting the ground.

8.2 There is no type of physical contact permitted in a marking contest. The player in front has every chance to mark the ball. A free kick is awarded against any player initiating contact.

8.3 An opposition player may stand on ‘the mark’. This is the place where a mark or free kick has been awarded.

8.4 The umpire will call ‘play on’ if it is deemed the player has had reasonable opportunity to dispose of the ball.

9.1 The umpire calls ‘play on’ in the following instances:

9.2 The umpire is permitted to call ‘advantage’ if the player in possession of the ball initiates the advantage.

10.2 The two designated forwards and scoring midfielder are the only players able to score. These players are identified by wearing a coloured sash. A score can only occur through taking a mark, receiving a kick or hand-pass or when they are awarded a free kick.

10.3 A scoring player is able to score if they are awarded a 15 metre penalty which takes them into the scoring zone.

10.5 A team is not able to score directly from out of bounds or from a turnover.

10.6 A team is only able to score inside the forward zone.

11.1 Teams are to be on the field at the scheduled game time

11.2 Games are started by the umpire's whistle at the scheduled time

11.3 The clock will not be stopped unless injury

11.4 Teams are to have a minimum of 5 players in order for a game to commence

11.6 A forfeit will result in a 60-0 win awarded to the opposition. Please note, multiple forfeits may result in removal from the competition.

12.1 Players may interchange at any time without notifying the umpire. A player must leave the field before the substitution may replace them.

12.2 There is no limit to the amount of substitutions a team can make during a game

13.4 In the case of a game being abandoned, the result of the game will be decided on a fault basis:

14.1 All finals fixtures will be advised to participating teams and posted online

14.2 Teams participating in finals must ensure they are available for all possible game times

14.3 Finals format will consist of the top 2 teams playing off in the grand final with all other teams playing placing playoff games to ensure every team gets a game on finals night.

14.5 In the case of a team being unable to play a finals game, the next highest ranked team will qualify

14.7 If teams are tied at end of a finals match, extra-time will consist of 2 x 3 minute halves. If scores are tied after extra-time, the first team to kick a goal (Golden Goal) will be deemed victorious

14.8 Players must have played a minimum of 3 games in the regular season to be eligible to play in finals

15.1 Footy 7’s is strictly a non-contact sport. The following actions (intentional or unintentional) are not permitted:

15.2 Any physical contact will result in a free kick awarded to the relevant team.

16.1 A 15 metre penalty will be awarded when a player engages in the following:

16.3 In the case of a red card offence, a player is sent off for the rest of the game and receives a minimum 1 match suspension. The player can be replaced after 2 minutes.

17.1  It is assumed games will go ahead in all weather conditions unless decided otherwise by the Venue Manager on the night.
In the rare case of a full night cancellation, a message will be sent to all teams prior to the night commencing.

17.2  In the event of a full night cancellation due to weather, all games will be recorded as a 30-30 draw.

The Code of Conduct is in place to ensure that all participants are able to be involved in an enjoyable and safe environment. As a condition of participation, all teams must agree to the following standards.

- Players must demonstrate respect for umpires, other players, spectators and staff.

- The team contact is responsible for the actions of their team.

- The team contact is responsible for communicating all matters regarding participation.

Any breach of the above standards will result in an official warning or immediate dismissal from the competition. Anti-social behavior, both on and off field, will not be tolerated.

Please note that banned players are not permitted to play for any team or enter the venue during competition.

Two or more players from any one team involved in a breach of the Code of Conduct will result in the team and all individual players facing removal from the competition.

Social Sport has the right to take any action deemed necessary in the best interests of all participants.

The following information relates to the suspension of players:

Did this answer your question?